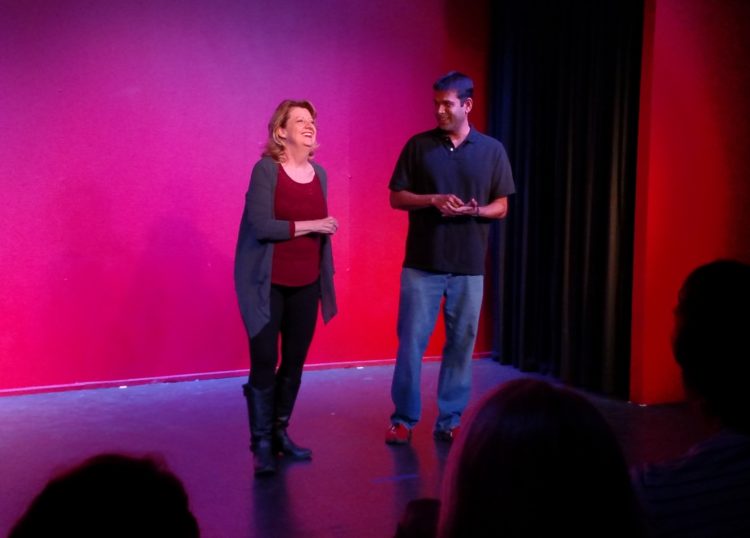 Sometimes you get a little revelation. You can’t force it. Can’t plan it and it only comes through the doing. This time it came while being a pranking cellie in prison, ’cause “You gotta find happy where you can” and an alien with a wayward left hand, who tells her sister she’s adopted.

All this happened last night during my Improv scenes in the ‘The New Guard’ Showcase at Austin’s The Institution Theater. Yes, I was both the pranking cellie and, in another scene, the alien whose left hand had a mind of its own. And for those two strange characters, I have only myself to blame.

I didn’t put the word out about this showcase. Wasn’t that I was apprehensive or had stage fright. No worries. I’ve been doing stage work forever. Just wasn’t expecting much. I was to be in only two short improv scenes. My last showcase I got, “Thought you’d be on stage more.” So to me, it was just go and do it.

Mind you, my 201 Improv teacher, the dynamo Sarah Marie Curry had prepped my class a million different ways. During each class meeting she’s been layering in techniques so we can absorb and learn the process.

We now know that to make a good Improv scene you have to have a character, relationship and location. Give your scene partner a name, establish a relationship whether it be wife, brother or friend. And you gotta do all that without walking on stage and immediately stating it in one fell swoop, expecting to play the scene from there. You must begin in the middle of a scene. That scene is then built by the interaction of the scene partners. That last little bit, Sarah Marie taught us during the rehearsal for the showcase. Thanks, Sarah Marie. Last minute cues, I was hoping I’d be able to do it.

Before, I’d been coming on stage with a focus and physical action in mind, like yesterday’s rehearsal, improvising seeing a tornado on the horizon or digging a grave. Poor fellow, I buried him with my cat. I improvised dialogue and listened, reacted and completed the scene with my scene partner.

After rehearsal Sarah Marie gave me these great notes, “Don’t worry about the dialogue. Don’t worry about filling the space with dialogue, writer that you are! Relax. Trust in yourself. Trust it will be okay.” Basically, you are enough. You will bring to the table, Mable, all that you need. Chill. Give the scene time to breathe. You gotta GWTF! 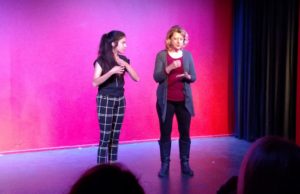 Now, this is different than working from a script, whether an audition or filmed scene. You can’t get that relaxed, in that you have to remember where the lines fall with the action, when working with a script. Though they overlap, working from a script for on-camera work is much more line specific set with blocking than the freedom you have in Improv. Memo to self. RME.

On a final note Sarah Marie ordered us to “Go out there and do bad Improv!” which totally gave us permission to have fun and tell that voice in our head to STFU. And, great class that it is, as we all waited to make our ensemble entrance on stage, we told each other, “I’ve got your back.”

But, at any rate, last night I nailed it. My Improv flowed! Waiting in the darkened ‘wings’ on the side stage in front of the audience, I watched and laughed, totally relaxed, enjoying the other scenes. Just before going up, I quickly thought of a simple action as a prompt to enter the stage and trusted myself. And it worked!

The scenes flowed, first with my scene partner Imran Kahn, in which we were prison cellies and later with Espi Rivadeneira as two alien sisters squabbling over use of right and left hands. I attribute this success also to having great, strong scene partners in Imran and Espi. But, to have this actually happen in the doing… well, it was a whispered Eureka moment. And I am pleased. 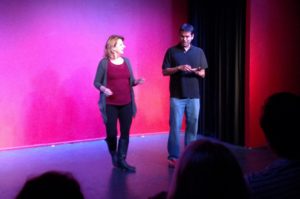 Sometimes you do get a little revelation. You know you’ve earned it when it happens, but then you know you’re lucky when it does. Thank you, Wise Master Sarah Marie Curry for teaching me to GWTF! No, really. –by Martha Hannah