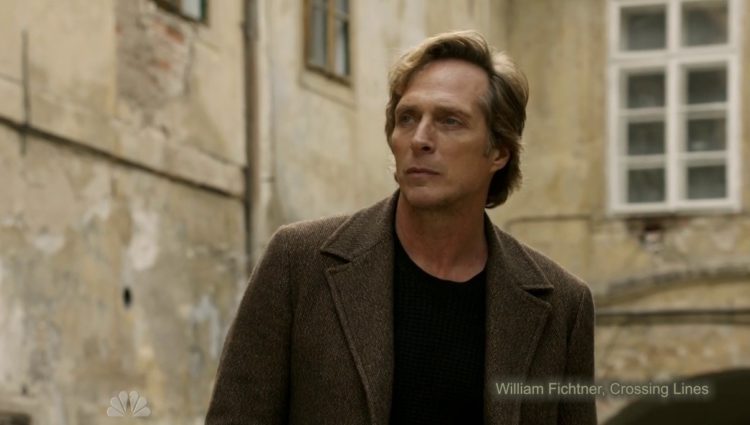 Something’s missing with this couple. Something’s not right. They appear loving toward each other and aggrieved of their daughter’s recent death. The father even sheds tears as he learns they have a grandchild. But something’s wrong and it took me a while to figure it out.

This small scene is in a Netflix drama crime series, Person of Interest episode. POI’s premise is that a former CIA agent, John Reese, coolly played by Jim Caviezel, is hired by a mysterious billionaire, Harold Finch, played by Michael Emerson, to prevent the impending murder of individuals predicted daily by a national mass-surveillance computer system, the Machine.

The grandparents in this scene appear real, but not real. Finally, I realized what it was. They are ‘acting’. Sure, I know they’re actors but they are going through the motions and it reads as false. They cease to be believable and I wouldn’t leave my newly reclaimed grandchild with them.

All the POI cast in the rest of the episodes is consistently great. In fact, Michael Emerson as the nerdy, eccentric, tech genius billionaire Harold Finch is so believable you never question he is not real. You ‘know’ he is Harold Finch. All the cast is superior, except these ‘grandparents’. And on such an incredible, well produced and performed show as POI, that is unusual. It stands out.

In my Brock-Allen Casting’s A Working Group Acting Conservatory classes I have been taught to ‘actively listen, to actively react’ in on-camera work. We just started our second year and the other night, in playback of my on-camera scene, there I am busy listening and reacting. I am doing what I’ve been taught. Yep, I’m ‘acting’. There’s quirky, hyper me with that crazy mouth busy reacting. I’m working it small, but still my acting shows. I blame it on my mouth. It’s all my mouth’s fault. Not the first time I’ve blamed my mouth and it won’t be the last, but Mouth, I’ve got to get you under control!

The key to this equation is that other thing I’m being taught by my casting director instructors, Sally Allen and Toni Brock. They say, “All you have to do is think it and the camera sees it. If you act it, it will look like acting.”

To me, the master at making it real is William Fichtner. He is riveting to watch. Unforgettable as the gravelly-voiced villain in Lone Ranger, he notched up the chill factor to ten by calmly eating the beating heart of one of his victims. And then wiping his bloody lips with the back of his hand and saying, basically, “Yum.” Creepy, right? He’s good.

Yet, in his role as Detective Hickman in Crossing Lines, William Fichtner has that knock-you-out kind of great acting handled with such a level of subtlety that you don’t see the finesse, you feel it! Also a Netflix crime drama series, Crossing Lines is set in locations across Europe where an elite team of detectives, based in The Hague in Belgium, mandated by the International Criminal Court, investigate and work to solve notorious cross-border international crimes.

In one scene William Fichtner as Detective Hickman has flown to NYC to talk with his former partner in the old Police Precinct office they once shared. He is following her out of the office and turns to close the door. He hesitates. Then Fichtner does something that epitomizes how masterful he is. It’s a simple thing, but quick, smooth and fluid. He looks back across his old office. In the time it takes to count one, two, three, four, five, you see him take full note of the room. You see him see the different areas of the office that in his former life he worked and lived. It’s all in his eyes. You can see him thinking it. It needs no words, no other expression. Then he pulls the door to. Through the window in the door and the glass panes in the office wall we watch him walk along the corridor, never looking back.

In another episode’s scene, there’s a small thing that Fichtner does that, again, blows me away. He, as Detective Hickman, is listening to a wealthy Russian Mafioso’s wife confess. Sure he knows she’s the murderer, but not until she starts talking does he realize the level of her malevolent coldness. At the moment she begins to describe the depth of her detached evil, you see true shock in his eyes. It’s fleeting and it’s powerful. Then he quickly covers that with his usual detached detective face. All this shown in his eyes, with no other expression or words. Simply his eyes. You can see him thinking. And it plays as real.

The more I learn, the more amazing it is to me as to how much control it takes to create such subtlety. It is a very fine line. It must appear effortless. It must look real. The camera sees it all and it has to be small reactions; simple, small, and internal. And I’ve got to work at it. Toni Brock says that everything below the eyes needs to be still. But then, you know me and my crazy mouth. This is going to take a lot of practice. Mouth, I’ve got to get you under control!  — by Martha Hannah