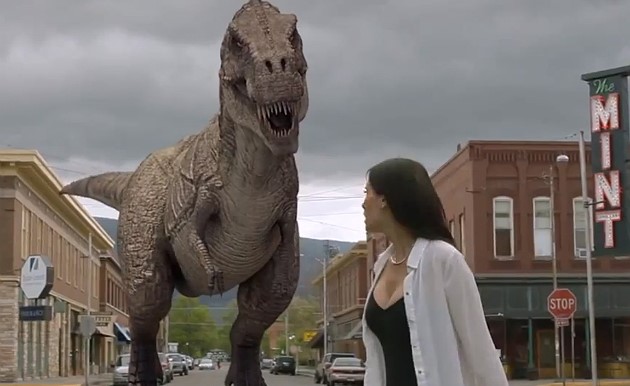 How do they get investors for something so poorly written? Or are they working to earn a Rotten Tomato Award? Or is it simply the chance to film as many random cleavage shots as possible and call it a movie? So many questions, so little time.

There are many mysteries in the Universe I’ve yet to unravel. Earth-shakingly important things I’m drawn to, that I dwell on, work to decipher and must get to the bottom of. Like cheesy B Movies. I watch them with fascination. Wasted time? God, no. There’s fruit in this labor. And whether it’s a calling or a cult, I’ve found I’m not alone.

Take ‘Cowboys vs Dinosaurs’. My husband, Larry Dowell and I were taking a ‘it’s been such a crazy day we need a break’ break and watching Netflix’ ‘Cowboys vs Dinosaurs’. Basic premise, methane-spewing dinosaurs attack a little, forgotten, conveniently sparsely populated western town. Extras cost money. It’s a B-movie. B for bad. It gets one star.

Halfway through I have to Facebook how hilariously bad the movie is to my North Carolina Sharknado buddy, Andrea Walker. “Andrea, thinking of you. Bring the popcorn.” For years now she and I have tracked, anticipated and salivated over every Sharknado movie. The bizarreness of them, the hilarity, the science of how truly effective Water Super Soakers and chain saws can or cannot be used against a massive hailstorm onslaught of attack sharks being flung out of tornadoes. Laughing together, we concoct scenarios that take it to a much higher level.

But that day, it’s ‘Cowboys vs Dinosaurs’. Andrea’s enticingly dark response, “I will win you over to the B side.” Me, “Funny! I think you already have.” See it’s a cult. It’s got to be. Beware the B Movie. It can be so bad, you just gotta watch it.

On the FB thread up pops my former teacher Donna Witherspoon with, “Didn’t you just LOVE Eric Roberts? Not!” The only star in ‘Cowboys vs Dinosaurs’ is Eric Roberts. Making a comeback, I guess, because this is one stinky B Movie. But, I must say, it’s so implausible, it’s really great. Me, “Yep, Donna. He was the best actor in the movie. Tho’ how can a locked-up-in-jail-derelict town drunk have such white teeth? And why not write him in as being useful to somehow fight the dinosaurs instead of letting him get free just long enough to become a Dino Snack?” Again, so many questions, so little time. I guess the low budget buys him a one day jail sentence followed by quick death by green screen.

Still on the FB thread, Andrea Walker replies, “Stop trying to make SENSE, silly!!” Then Larry joins us on the thread with, “Yes, how do you make sense of a bevy of 20-something girls in short cutoffs and cowboy boots shacking up with scruffy men in their 40’s & 50’s? Or methane breathing dinosaurs popping up out of the ground? Or raptors who take one bite out of a human and then move on to the next to achieve maximum kill ratio?”

Then me, “I’m getting dizzy just thinking about it! Must be the methane.” Yet my brain spins on, “And then what about the cleavage to casting ratio for the female roles?” It was pretty apparent every female in the movie had been cast with a cleavage requirement.

Donna added logic, “I think someone had a really big night with lots of alcohol, then had a nightmare. Waking up they decided it was a good idea for a screenplay. Hey, I could write a screenplay about teaching school! Nah…too boring, but I could throw in some dinosaurs and a shark in the Greenbrier water supply! Yeah!” Good, she’s back on track. Logic isn’t always a good thing.

Me, “That’d work!” Nothing like a landlocked Tennessee small town needing sharks in their water supply. Followed on the thread by Andrea’s, “Sharks in the water supply!” It got her vote. Hilarious! And on we went.

Still, it’s funny the things that give you hope. Cult or not, when I watch B Movies like this it takes away the fear factor. Not the fear of sharks flying out of tornadoes to wreak havoc amongst us. It would be blasphemy to say otherwise. I cannot abandon my Sharknado buddies. But the fear of writing something unacceptable, something that’s just not good enough. That fear of not being able to write a script with award-winning merit. I think I’m going to shelve that fear. Look at ‘Cowboys vs Dinosaurs’ and ‘Sharknado’. How bad does a script have to be to not get an investor? Maybe achieving a Rotten Tomato Award is just the thing. And since it seems, thank God, silliness sells, there may be hope for me. Time to ‘writer up’! This B-Side may just be my market! –- by Martha Hannah