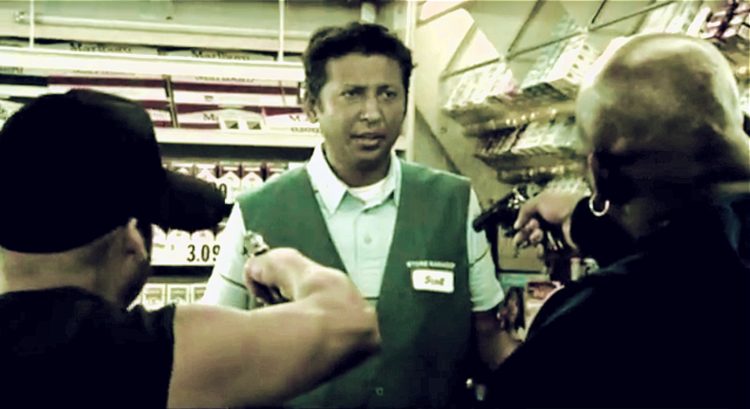 This is a clip from the movie ‘Walking Tall: Lone Justice’ and, as it turns out, the convenience store clerk is played by my A Working Group classmate, Mohammad Ahmed. In the scene Sorbo’s the star character and badass good guy who knows what he’s doing, but in a comic fluke he misses. The can hits the clerk squarely in the face and bam! he’s down. It’s unexpected, it’s funny. And thank God, it’s not real. Mohammad was showing this clip, sharing his demo reel with our class. And, oh, my! I roared with laughter. What a great straight man he plays.

I must say, it’s a joy to be part of this class with Mohammad. He has such surety and joie de vivre. And he so kindly shares what he knows with the class and tips on how to navigate the world of auditions. If you’ve got a mountain to climb, Mohammad is the guy you want with you. If you need someone confident, sure-footed with vision, he’s the man. And, if there’s anything that’s hard to climb, it’s getting up through the ranks of the auditioning world and into actually being cast.

Every time I hear Mohammad talk, I end up smiling. It just brings a smile to my face. Actually, he is a brilliant, world-renowned software engineer, but when you hear Mohammad talk, you know his passion is acting. I love his enthusiasm, his zeal for acting on camera. And most of all, his surety in his pronouncements, his forcefulness in whatever he’s speaking about. And that, always, for lack of a better word, tickles me.  He knows there’s a plan and he knows how to work it. Confidence abounding, Mohammad’s inspiring. He literally is Walking Tall. And I’m so pleased to see him in this movie.

As if the scene wasn’t hilarious enough, the only clip I could find of it is dubbed in German. There’s more of Mohammad in the actual movie. He has a lengthy scene as the straight man behind the counter, refusing to give into the robbers. But this will at least let you see what a great face he has and how wonderful he is. And, man, can he take a pratfall. Enjoy! –By Martha Hannah