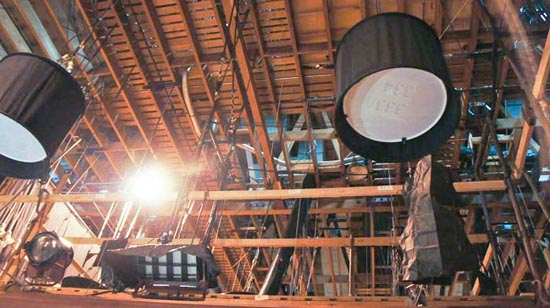 Like something out of a children’s fairy tale, I’m perched on a quarter of a sliced apple as the trees outside slowly glide past the windows and then rearrange themselves. The light outdoors changes from afternoon to morning, from the fall’s grey to a beautiful light blue and back again, all in a matter of moments.

It’s my second day on set of the TV series American Crime working as a stand-in for the amazing Hope Davis. I thought it unusual the Director of Photography called for four apple slices in the middle of the busy scene set up. Coincidentally, a moment later one of the directors walked by eating a red apple. Turns out an apple is a wooden box that I, as a stand-in, stand on to make me the same height as Ms. Davis. Already, early that morning, I had been color coded by Wardrobe to wear matching color and tone as the outfit she wore.

My job was to stand on or move to the correct spot as directed to enable the directors and crew to preset their camera angles, lighting and actors’ marks in order to be prepared when the actors come in. It allows the magic to happen without interruption. It seems I’ve arrived in my acting career at this hallowed spot to be a moving, living mannequin and it is kinda neat.

I loved the perch from the apple box. I could imagine gliding on it around the room with it elevating me up and down to make me tall enough to reach something. Anything that I could never reach before. In this altered universe, throughout the day, someone would say, “Greens!” and on command the trees would again move past the windows and rearrange themselves as if they had feet. Occasionally you got a peek of crew member’s hands embracing the tree, but it was convincing enough. Just another Alice in Wonderland normal occurrence.

The thing that’s most striking about being on this set is how this huge number of people, this large crew works as one. How intent they are, how professional and how hard and how well they all work together. From the very top level right down to low man on the totem pole, they all work together as if a well-oiled machine. This is serious business. There is no down time and it is precision itself.

Certainly, as an actor, it is a great lesson to be on set. To see the inimitable Felicity Huffman running her lines, giving it variety, finding every nuance, making it seem effortless. And during scenes, while viewing monitors, to see the scene partners’ active listening and interaction that completes the circle and makes the scene come together.

The directors, Rachel Morrison and Jessica Yu, have such amazing artistic vision. They are phenomenal. Of course, they’re known for that. Working together, they meticulously craft each element of each scene by directing the whole crew to merge together in bringing about true mastery of each shot. There is a high level of artistic beauty they achieve in their work. They are gifted. And to see it produced firsthand, is remarkable.

Who knows if I have another day on set as a stand-in, but it has been unique to say the least. Thank you, Sally and Toni and Willita at Brock-Allen Casting for the opportunity! And now I have visions of owning a sliced apple box that will glide me around any room and elevate me to reach new heights untold.   — By Martha Hannah