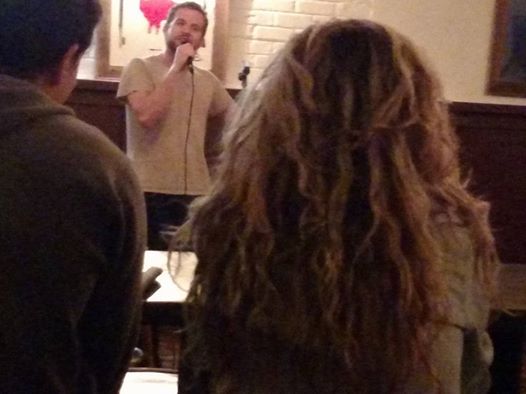 Down on 6th Street recently, Larry and I dropped in at Austin Ale House to catch the newest stand-up comedy show in Austin, Banter with Bogart. The location’s perfect, the food great and the drinks are good. And then there’s Brian Bogart. He’s cool. He’s savvy. He’s a man with a plan. This is Bogart’s show and it’s a good place on Monday nights for stand-up comics to work their routines.

Of course, it’s a late night, as any stand-up should be. Comics come in early, sign in to get on the lineup. Show begins at 9:00. Bogart opens by doing stand-up himself and then he hosts the show. Each comic does about 4 minutes, after which he banters with them, throwing out questions for the comic to field. It’s fresh, gives the evening a twist.

Comedy is all in the writing. You’ve got to work the material out ahead of time, write it and write it again. I always write, package it, trim it and trim it again. You’ll even catch me working my material into a casual conversation just to see how it plays. Before I ever get on stage with it. That’s the way I work. It’s a process. Then I work it in out front of the audience, and still, afterwards, go back and do rewrites.

It’s all in the writing, the timing and adapting it to different audiences. And, being knowledgeable enough with the material to confidently ad-lib around it on stage. It’s work and it’s an art. Those that are good at stand-up make it look easy. But it ain’t. If it appears easy, it’s only because the comic has really done his homework ahead of time.

You gotta give comics points for simply getting up and getting through. And new ones tend to take nose dives into certain traps. We saw several new comics that night, doing major no’s you should never do. Not to say that my jokes always fly, but there are things to keep in mind.

Like, if a joke bombs, you never, never say, even laughingly, “Oh, that was bad.” Never self-critique out loud during a set. No one in that audience shows up to do your therapy. If you’re going to get up and you get crickets, then have the guts to suck it up and go on.

Then there was the guy that jumped up with big bravado, screaming what a great show it is and his routine falls flat because stand-up is more than just being loud. There were the shock jocks that do cruelty jokes that don’t go anywhere. And then there were the myopically self-indulgent comics who don’t know enough about either history or current politics to be clever about it. Uh, Google.

Fortunately, there were several good comics at Banter with Bogart that night. They were adept and smooth. Some said funny things, some said things in funny ways. There was a decent variety and my fav, though new, was the female comic doing engineering jokes. Now that’s quirky and so Austin.

But, I’m telling you, Brian Bogart was the highlight of the evening. His ad-lib and comic delivery were great and smooth, his hosting professional. Not to mention, he’s gracious and has an easy laugh. All the while he flashes that smile and exudes charm. But in a nice way. You can’t beat it. And that charm, whether doing stand-up live or working on camera, it opens doors.

So come down to Banter with Bogart for Monday nights. Watch these comics grow. And catch Bogart’s new Friday night show with an even bigger crowd. But, most importantly, keep your eye on Brian Bogart, cause he’s going places. –- by Martha Hannah