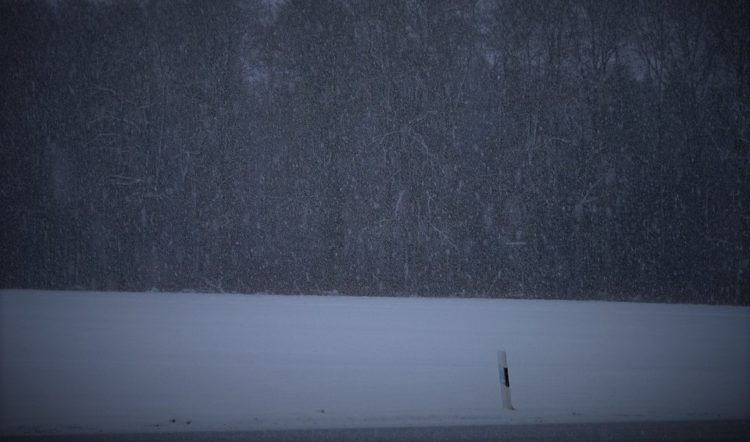 Our car headlights shone out into a vast whiteness. Everything blanketed in a deep, white coated silence. The darkness of the night sky endless, punctuated only by continually falling giant snowflakes which were buffeted and swirled in the wind. Frantically the windshield wipers beat from side to side to clear them away so we could see to drive.

We were the second in a caravan of four cars filled with actors. No means of communication, long before cell phones, headed south on the interstate which was rapidly disappearing before our eyes.  It was becoming a whiteout. Like something out of Twilight Zone. In our car we were quiet. For actors, that’s not normal. When off stage, actors are never quiet. Unless they’ve gotten into trouble. Most traffic crawling along beside us had turned off at the last exit and we realized they knew something we didn’t know.

It was my first time to be in a touring dinner theatre troupe. I played the buxom blonde ingénue in a large 8 person cast, ditzying onto stage every night in my very short skirt, wearing illusion-of-the-theatre 3 padded bras all at once. The joke was on the audience. It was a romping, hilarious murder mystery comedy called The Busybody and it was a hit. And I had a lot of great lines.

The dinner theatre we’d just left was located in the tiny town of Hurricane in the mountains of West Virginia. Packed every night. Seems it was the only thing jiving late at night in that part of the world. We did 6 shows a week including Sunday matinee for a month, lived over the theatre dorm style and each day had to pile our plates up high from a same-meal-for-the-month dinner buffet to last throughout the following day. All for a poor excuse of a paycheck.

It was tough, but it was fun. Like many dinner theatres of that time, the stage magically lowered onto the audience floor for each act with actors in place until it transcended again for the next scene change. On my off scenes, from the greenroom upstairs, I would watch the audience bend together in a wave of belly laughs, time and again. Like I said, it was a great show.

There’s nothing like it for learning what a stage actor needs to learn. Working a show nightly for months on end with a sharp and bonded ensemble of talented actors. Confident in your lines, playing the audience for all it’s worth. That is when you really get to play and you learn to fly.

But final night after the show, the theatre owner was done with us. A new cast was coming in next morning and we were to leave. News reports had it bad weather was on the horizon, but she didn’t care. It’s a hard lesson to learn when you’ve done such a fine job, but right then and there I learned as a young actor that actors are expendable. Surely that’s a truth when they’re willing to throw you out into an oncoming blizzard.

The lead car in our caravan crept over to the side of the highway and stopped. We all followed suit. Which demanded an all cast shivering actors’ huddle in front of the first car’s headlights to figure out what was going on. Someone had heard on the radio that the entire interstate had been shut down. Could they do that? I guess so. Full blizzard on, it was totally closed.

Quickly back in our cars, in tandem we followed the red taillights of the only remaining semi on the interstate as it pulled off at the next exit. Staying in its wake, we worked our way to a small hotel and found safe harbor. By pooling our money we managed one room for all eight of us. No complaints, just thankful to be alive. Next morning, interstate open, we headed south again toward our destination, a Nashville dinner theatre to begin another month of hilarious shows.

Makes an impression on you and you go on. But you never forget, it’s business. They love us, then they let us go. Yeah, expendable, that’s what we actors are. And yet, it is how we learn to fly. -– By Martha Hannah